What is the Census?

The count is mandated by the Constitution and conducted by the U.S. Census Bureau, a nonpartisan government agency. The 2020 Census counts the population in all 50 states, the District of Columbia, and five U.S.

territories. In mid-March, each home will receive an invitation to respond to a short questionnaire—online, by phone, or by mail.

Why should I do the Census?

When is the Census?

What will the Census ask?

The Census Questionnaire is easy to complete and only asks for basic information, including household member’s names, age and race. Click the sample questionnaire on the 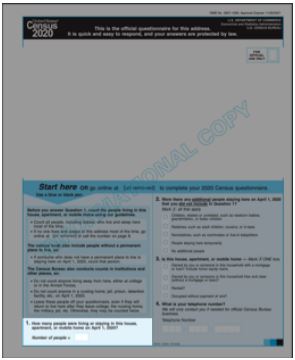 right to view a sample questionnaire.

Will my answers be safe?

Yes, by law, Census responses can’t be shared with other Federal departments, landlords or local authorities. Every Census worker takes an oath to protect personal information. The Census only shares aggregated data. The Census has made technology security a priority and has an advanced protection system.

How do I know this piece of mail or Census worker is official?

When you receive a piece of mail, keep in mind that the Census Bureau will NEVER ask for:

If someone claiming to be from the Census Bureau contacts you via email or phone and asks you for one of these things, it’s a scam, and you should not cooperate. If someone visits your home, you can check that they have a valid ID badge, with a photo and U.S. Department of Commerce watermark. If you suspect fraud, you can call (800) 923-8282 and speak with a local Census Bureau representative. For more information, visit the Avoiding Fraud and Scams page on the Census website.